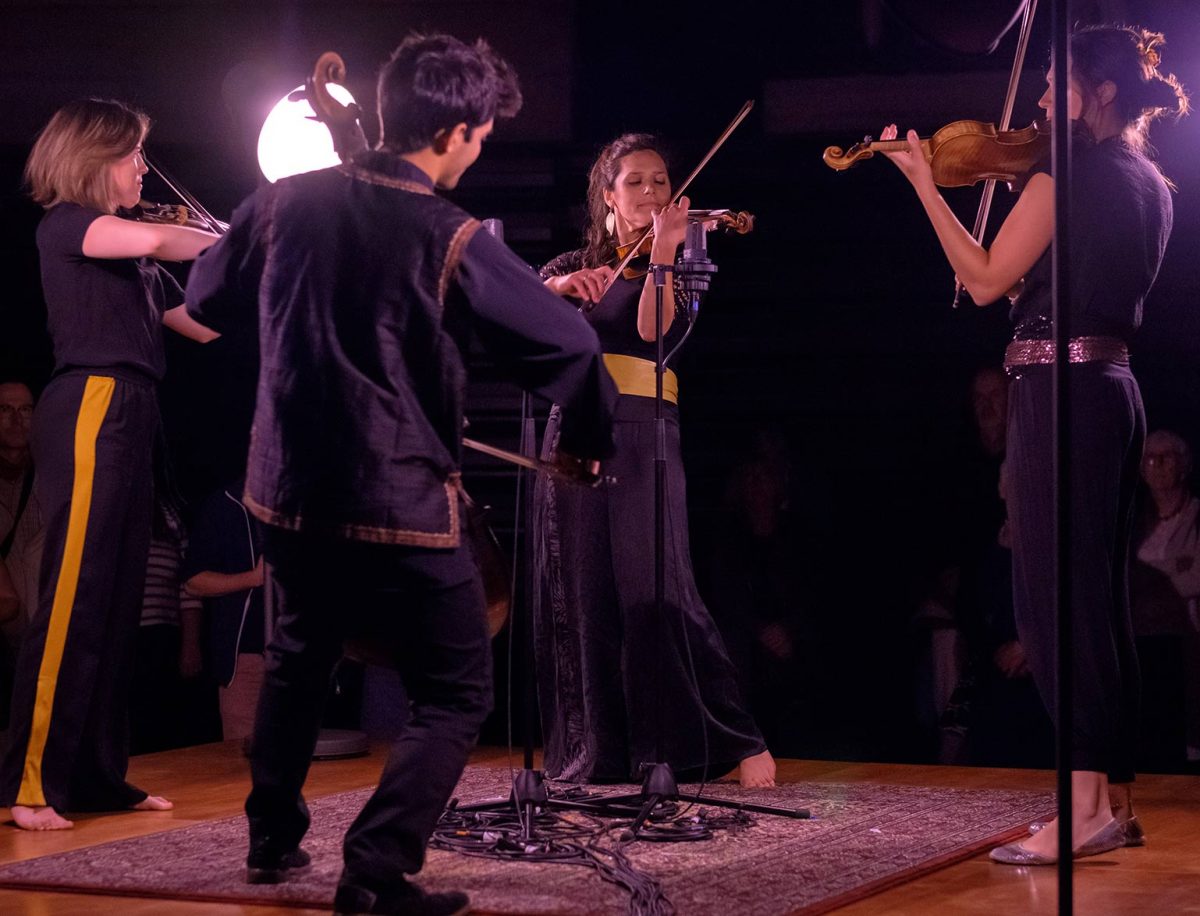 THE SINGH QUARTET was formed by four students at the Royal Northern College of Music. It receives regular coaching from Christopher Rowland, Director of Chamber Music at the college and has participated in all RNCM quartet festivals to date (QuartetFest, BeethovenFest, SchubertFest and MendelssohnFest). The Quartet was awarded the John Barbirolli Prize for String Quartet and the Nossek Prize for String Quartet. In Spring 2003 it undertook a number of performances of Dvorak’s Piano Quintet with fellow student, Kodo Osada. The quartet is in increasing demand throughout the UK and recent engagements have included recitals for the Federation of Recorded Music Societies, Lady Lever Art Gallery and Crosby Hall Education Trust.

RAKHI SINGH was born in 1982 and began studying the violin at a young age. She was a pupil at Chetham’s School of Music and is currently in her fourth year at the RNCM where she is studying with Wen Zhou Li. In 1996, she won the Audi Junior Musician Competition after performing the Max Bruch Violin Concerto No. 1 with the London Philharmonic Orchestra, conducted by Howard Shelley at the Queen Elizabeth Hall, London. A few months later, she also won the Texaco Young Musician of Wales competition. As a result of these successes, she has given many concert performances in the UK and in France, Germany and Austria. In 1999, she was awarded the Ivor Walsworth Memorial Prize for a string player of promise in the Royal Over-Seas League Music Competition and more recently reached the National Finals of the BBC Young Musician of the Year 2000 Competition and the semi-finals of the Yehudi Menuhin International Violin Competition. Last year, Rakhi was the recipient of the RNCM Eric Nicholson Prize for Violin.

Rakhi has appeared as guest soloist with many orchestras, including the Hallé as part of the Children’s Concert Series and the BBC National Orchestra of Wales conducted by Wayne Marshall in the Last Night of the Proms celebrations at the Eden Project, Cornwall. Rakhi enjoys solo performance and chamber music equally and is always keen to work with other musicians.

CATRIN WIN MORGAN was born in 1981 and comes from Llangadog in the Towy Valley. She attended Chetham’s School of Music where in her final year she was awarded the Orchestral Prize and the Ida Carroll String Prize. Catrin is currently in her fourth year at the Royal Northern College of Music, studying the violin with Yair Kless, and the harp with Frank Sternefeld. Catrin has had many successes in local Eisteddfodau and music festivals, winning the 15-19 string category in both the Urdd and National Eisteddfodau in 2001, and this year winning the 19-25 string category in the National Eisteddfod. Catrin won the Dyfed Young Musician 2000 competition, which led to solo recitals in St. David’s Cathedral, the Carmarthenshire Music Festival and the Wexford Spring Festival in Ireland.

POLLY WILTSHIRE was born in 1982 and started off her musical career as a founder member of the Salisbury Cathedral Girls Choir at the age of 9. She then won a DFEE Scholarship to Wells Cathedral School, where she studied the viola with Patricia Noall. She has taken part in a large number of orchestral, chamber and solo concerts and led the Symphony and String Chamber Orchestras at Wells. Polly has attended holiday music courses from an early age, including the National Children’s Chamber Orchestra and the National Youth Orchestra, in which she was co-principal in her final year. Polly enjoys chamber music and solo performing and she is currently in her fourth year at the Royal Northern College of Music studying with Predrag Katanic. She was recently awarded the Cecil Aronowitz Prize for Viola.

ELIZABETH MAY was born in 1981 and started learning the cello when she was nine. By the age of twelve she was a member of the National Children’s Orchestra. She was at the Yehudi Menuhin School for six years, where she studied with Louise Hopkins. She won a scholarship to the Royal Northern College of Music where she is now studying with Li Wei Qin as a fourth year undergraduate.

Elizabeth’s solo cello performances have included a concert at the British Ambassador’s residence in Paris and the Saint-Saëns cello concerto with the Jupiter Chamber Orchestra. She also played at a concert in the presence of HRH Princess Margaret under the direction of Lord Menuhin. At the same concert, she played jazz with John Dankworth and Cleo Laine. She has played to the Prime Minister at Downing Street and her school string quartet made a recording for Classic FM.

As a winner of a local Young Musician of the Year Competition, Elizabeth gave a solo performance with the Royal Liverpool Philharmonic Orchestra conducted by Carl Davis at the Woking Festival, to an audience of 3000.